The vineyards in the Aegean islands comprise several thousand acres of cultivated vineyards, with almost exclusively indigenous grape varieties. These island vineyards are surrounded by the sea, which has a positive influence on the flavour of the grapes. In the northern Aegean the dominant grape varieties are Muscat White and Muscat of Alexandria, while in the vineyards of the Cyclades and Dodecanese, the main varieties cultivated are Assyrtiko, Athiri, Monemvasia and the red variety Mandilari, as well as a host of local varieties in smaller quantities.

Wines in the Northern Aegean region are still cultivated in traditional ways and often we find vineyards with landscaped terraces to limit soil erosion and to retain as much of the limited rainwater.

Visitors shouldn’t leave without tasting the rare local grape varieties and the unique blends from the Aegean Islands. The white wines are particularly worthwhile to try, and perfectly accompany fresh seafood and other local dishes. Most of these amazing wines are not available in department stores, but they can be found at local wineries.

The grape varieties of the Aegean Islands are: 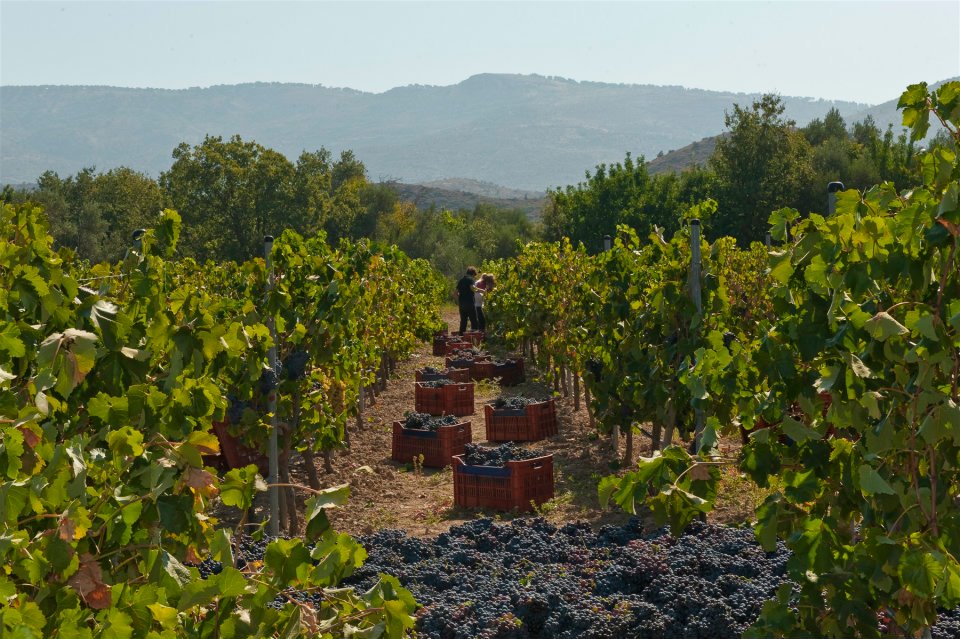 Wine has been made on Chios since at least the 5th Century BC, as evidenced by the discovery of Chian amphorae in ancient sites in the Greek capital, Athens. Chios wine was renowned all over ancient Greece and beyond. The Chian ships transported it throughout the Mediterranean.

Today, there are two wine producers in Chios, concentrated in Amani – the Northwestern part of the island.

The winemakers here cultivated native varieties such as Savatiano, Roditis, Athiri, Assyrtiko, Mandilaria, Fokiano, Chian krasero and Agiannitiko. All vineyards are planted at an average of 1,200 feet elevation on the slopes of the Amani mountain. The winery produces both dry and semi-sweet wines.  The production is done using traditional methods, yet adheres to modern winemaking technologies.

You can visit the winery as part of the Chios Wine Tasting tour.

The relatively small size of the island and its low relief, the tolerable road network and the large concentration of wineries make it an ideal destination for travellers interested in wines.

The highlight of Lemnos’s wine scene is the Muscat of Alexandria grape variety, known locally as Moschato Alexandrias or “English Vines”, which makes up the vast majority of Lemnos’s plantings.

The island has more than 1,250 acres of cultivated vineyards. Vineyards and wineries are mainly spread through the area of ​​Atsika but also in the areas of Myrina, Moudrou and Nea Koutalis. ​​Agios Dimitrios Atsiki has around 45% of all ​​Lemnos vineyards. The famous Muscat of Alexandria grape variety covers 90-95% of the total area, while the rest of the land is planted with the ancient Greek red grape variety Lemnio.

Lemnos has a number of wines with a designation of origin (PDO). The two most famous ones are the Lemnos white dry wine and Moschato Lemnos white sweet wine.

Samos island boasts a Samian Wine Museum at Vathy, one of a few wine-growing museums in Greece.

The vineyards of Samos have a total area of approximately 4,500 acres.  The soils of Samos are mainly of low fertility and most vineyards are located on landscaped terraces on the slopes of the central mountain of Samos called Ambelos (or Karvounis). The most prominent variety is Muscat White, occupying 95% of the land. The vineyards are mainly located on the north side of the island, between Karlovasi and Samos town. The vineyards of Samos elevation ranging from lowlands up to 900m, thus presenting elevation differences that affect the flavour characteristics of the wines.

The Muscat White is intended primarily for the production of the famous Samos sweet wine. One of the most famous Greek sweet wines, the white Muscat Samos has a protected designation of origin (PDO).  The Samos nectar wine is produced from over-ripe Muscat grapes, hand picked and dried in the sun for several days to develop its high degree of sweetness. It is best served with sweets and fruits.

The island has a long history of winemaking dating back to at least the 7th century BC when it was mentioned in the works of Homer. The fame of Lesvos wines had spread throughout ancient Athens, Rome and Byzantium. However, the winemaking tradition of Lesvos came to an end at the beginning of the 20th century because of a vine-root eating bug – phylloxera’s.

Thankfully, over the last couple of decades, viticulture in Lesvos has revived and grown significantly.  Nowadays, a large variety of wines, including red and white, dry, semi-sweet and sweet is produced on the island.  Lesbos also has a Protected Geographical Indication (PGI) for its wines, which was established in late 2010.

The most famous of Lesvos wineries is Methymneos Wines, established in the late 1990s. All the vines of Methymneos are organically grown and do not contain industrial fertilizers or agrochemicals in their vineyards. They produce both red and white wines. Methymneos red is an oak-aged wine with a strong minerality and a light ruby colour. Methymneos white is a blanc de noirs made from the same red variety and has Muscat and citrus aromas. The winery and vineyards are open to visitors.

From the ancient Ikarian wine mentioned by Homer in the Odyssey. In Ikaria, Pramenios wine was produced by the ancient Oinoi, whose name comes from Pramno, the ancient name of the Athera mountain range (the highest peak is Melissa, 1040m) which crosses the island.

Today the Ikarian wine, outcome of a surviving ancient recipe of storing the wine in clay jars buried in the earth, has acquired formal recognition of its identity and Ikaria is included in the list of the very few places in the world which produce dry wines with naturally high levels of alcohol. The vines and wineries are mainly located in the areas of Evdilos and Raches.

Ikaria also holds a Protected Geographical (PGI) Indication for its wines. The PGI Ikaria zone was established in 2006 and comprises the entire Island.