he fifth largest Greek island is a hidden treasure in the Aegean, famous not only for its rich history, great naval tradition, remarkable ancient Greek and medieval monuments but also marvellous local products, such as the mastic. Alongside these, the island is also home to numerous festivals and celebrations, some of which cannot be found anywhere else.

As an island with a strong maritime tradition, Chios has a special celebration to honour its sailors and the Greek naval forces. During the Christmas holiday, children team up in groups and work together to make model ships, mostly from wood. This tradition dates back to the liberation of the island from the Ottoman occupation, as a way of commemorating the arrival of the Greek navy on the island. Together with the ships, the children also prepare poems and carols that contain wishes for sailors. Each team, composed of the captain and the crew, presents their boat and sings the songs. They start working months before the New Year’s Eve to build the boat. On New Year’s Eve, they visit the houses of their neighbourhood singing Christmas carols and showcasing the wooden boats. During the celebration, the groups of children from different districts and their boats gather in the central square for festivities and the best boat receives an award.

The Rocket War or the “Rouketopolemos” is perhaps the most fascinating and unique of Chios traditions.  It takes place on Good Saturday’s Eve before Easter in the village of Vrontados, which lies to the north of Chios town. Every year, during Greek Orthodox Easter celebrations, members of two rival churches – Agios Markos and Panagia Erythiani that are both located across a small valley in Vrontados, stage a “rocket war”. They fire thousands of homemade rockets towards each other while services are held in the churches. The objective for each side is to strike the bell of the opposing church. The festival has reportedly been celebrated since the Ottoman era. According to local tradition, it was at the time performed with real cannons until Ottoman authorities prohibited their use in 1889. In the last couple of years, thousands of firework rockets are being fired,  creating a spectacular view the night before Easter. 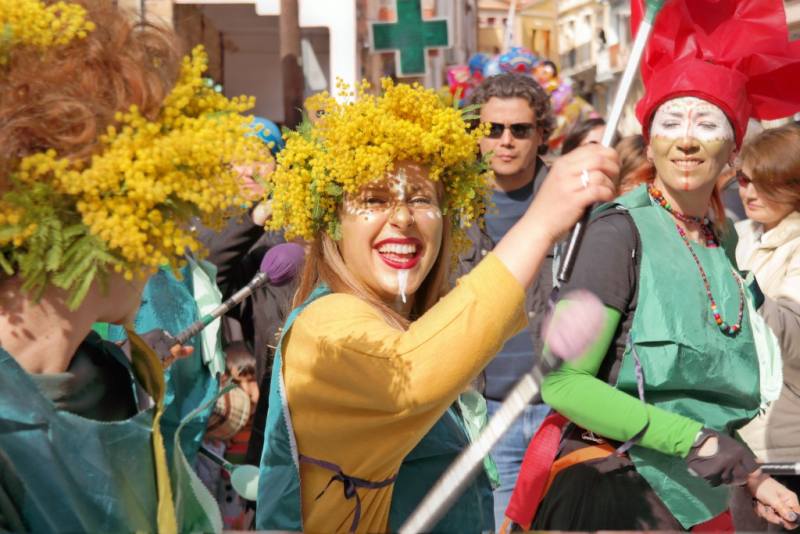 The custom is ancient because it has its roots in the Middle Ages when pirates looted the islands and harvested the crops of the inhabitants.

It is said that during the Carnival time, while all the villagers were celebrating, the watchtower guards sent a signal that pirates were approaching the coast. The men of the village immediately went there and set up an ambush. The pirates were defeated and the villagers took their prisoners back to the village where they showed them off (Mostra comes from the Italian mostrare) and celebrated.

Since then in commemoration of this battle and victory against the pirates, every year on the last Friday of the Triodion, the residents dress up with old women’s or men’s clothes of the time and hide their faces with improvised masks to represent that event. On Sunday, they gather in the central square of the village and dance the traditional dance of “talimi”, which represents the warrior’s movements during the battle against the pirates. Afterwards, after the dance and with the accompaniment of musical instruments, they sing the war chant and head for the central church of Agios Eustratios, where the Chian banners with flags hanging on the railing.

The custom of Aga is one of the oldest of Chios and takes place every Clean Monday in the central square of various villages (Mesta, Olympi, Lithi). It is a tradition that has its roots in the Ottoman domination when the Turkish Pasha who ruled the Mastichochoria imposed severe penalties. The “Agas” event is a parody of the spring tour the Aga that used to make around Mastichochoria and of the Ottoman judges that punished the Chians. On the morning of the Clean Monday, a local dresses up in Aga’s clothes and, together with his staff (police officers, prosecutors), after a solemn entrance to the village, sits in his seat and judges the attendants. The parody trial includes teasing, satire and humour.

The Diplo dance in Volissos

As usual, on the last Sunday of the Carnival, locals of the Volissos village gather for a traditional dance called “Diplos” that takes the form of a human “double chain”. They begin to sing from all the neighbourhoods of the village and end up in the central square forming a very large chain. In the main square of the villagers put together a feast, where the guests are offered souma and sweets.

The festivals (panigiria) have a leading role in the cultural life of Chios every summer, so the island, especially in August, is transformed into an immense celebration. The feast of St. Markella on July 22 and the feast of Virgin Mary on August 15 are the two major festivals of the island.