Chios Sightseeing: How to Spend the Perfect Weekend in Chios

Arrive in Chios town early in the morning by ferry or by airplane. At pretty much any time of the day, you will find open cafes and restaurants on the seaside of Chios town. Here you can grab some coffee before heading out South to explore some of the most stunning corners of the island.

On your first day on the island, explore the Mastic Villages (Masticokhoria) in the south, where the mastic tree resin is cultivated. The Chios Medieval Food & History Tour includes stops in the Mastic villages with a combination of history, architecture, and gastronomy.

The first stop of the itinerary is Vessa – located around 19 km south of Chios town. Vessa is a well-preserved, unique medieval village. The buildings are built from local stones to camouflage the village from the pirates. Built in harmony with its surroundings, the village has been standing there for many centuries, waiting for the travellers to explore its hidden gems. Take a stroll through the narrow, labyrinth-like streets of New Vessa and Old Vessa. Explore the many shades and forms of local stones.

From Vessa head to the Chios Mastic Museum– about 10 km south of Vessa. The Chios Mastic Museum walks you through the production history of the mastic tree cultivation and the processing of its resin. The Museum building itself is an architectural gem well worth seeing and integrates seamlessly into the cultural landscape of Chios.

From the Chios Mastic Museum, it is another short 5-minute drive to Pyrgi village. Pyrgi is perhaps the most well-known and most unique village on the island. It distinguishes itself from other villages on the island for its architecture. The buildings in Pyrgi are engraved with black and white geometrical figures, presenting a unique sight. 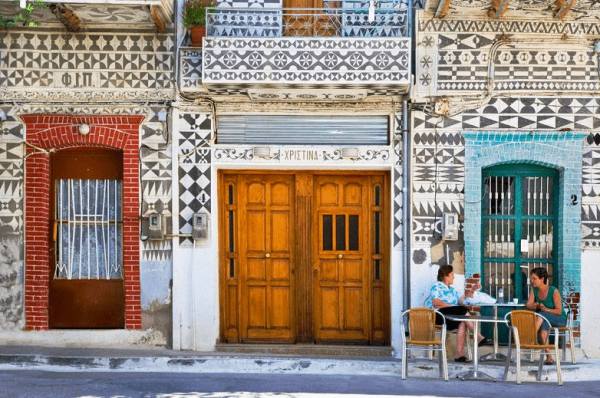 From Pyrgi, head 7 km East to Olympi – one of the most picturesque villages on Chios. This traditional village has arched streets and beautiful stone houses and makes for a perfect afternoon walk. Close to Olympi, there is also an impressive cave. The cave dates back almost 200,000 years and has magnificent rock formations.

From Olympi, head Northwest to Mesta – the furthest from the medieval villages, but also the most well preserved. The form of the village and its architecture is totally unique. The houses are built side by side with no gaps, leaving only two main gates to the village. The streets are narrow and most are covered with arches on which houses are built. The whole village has been designed and built like a labyrinth in order to prevent pirate invasions. Go inside Mesta’s castle walls to the centre to explore the small streets. Spend time in one of the cosy cafes on the main square.

Nea Moni is a monument of international importance and is on UNESCO world heritage site. The church is the greatest example of the octagonal type of church and it is decorated by mosaics of various kinds. This 11th-century monastery represents a characteristic example of the Middle Byzantine architecture and aesthetics.

Anavatos, the next stop of the itinerary is 12 kilometres from Nea Moni. Anavatos is a byzantine tower-village built on a conical rock 450 meters above sea level making a striking appearance. The residents benefited from the rock and built a wall around the village making it look like a real fortress. The houses were glued next to each other, made of stone, with wooden ceilings, low doorways and small arched windows. The village was abandoned after the catastrophic earthquake of 1881 and today it is a national monument for the island.

After a short drive from Anavatos, you will arrive in Avgonyma, a scenic mountaintop village.  It’s filled with beautiful stone homes and makes a perfect spot for an afternoon stroll.

Beyond Avgonyma lies a string of quiet beaches, the most popular of which is picturesque Lithi, which has several inviting tavernas next to the small bay. Lithi is also the perfect spot to watch an unforgettable sunset.

Heading north 40 km from Chios town you will arrive at Volissos. If you arrive before 10 am make sure to visit the traditional stone-built bakery and taste the freshly baked bread with a full spoon of local honey. Then walk to the Castle at the top of the hill, built in 11th century, with breathtaking views of the Amani area. In Volissos you can pay a visit to the local winery and taste the local varieties.

About 8 km from the village of Volissos you will find the Monastery of Agia Markella, the patron saint of Chios. This monastery is located right on the beach and has beautiful views of the secluded island of Psara. If you happen to be in Agia Markella on July 22nd, the celebration day of Agia Markella, you will have the chance to witness one of the most magnificent festivals of Chios island.

Leaving Volissos, head north to admire one of the most famous natural wonders of Chios: the Agio Galas Caves. The cave of Agio Galas is made up of a complex of three caves. It is striking for its size and the number of chambers. It is one of the most important caves of Greece from an archaeological standpoint: traces of habitation have been found in its interior from early Neolithic times, i.e. around 6000 BC. The findings are on display in the Chios Archaeological Museum.

From Agio Galas head to Egrigoros to visit the second winery and taste the local wines while enjoying the magnificent view.

2 thoughts on “Chios Sightseeing: How to Spend the Perfect Weekend in Chios”