Easter is the biggest religious holiday of the year for Greeks. The preparations and customs, including traditional foods and large feasts, remain an important part of modern Greek life.  The Greek Church marks Easter by the Grecian calendar and so Greece celebrates Easter a few days later than other European countries.

While each region may have its own local customs associated with Easter, there are several traditions that everyone observes.

Preparations for Easter begin with Clean Monday, which is the first day of lent. During lent, which lasts for forty days before Easter, one is not supposed to eat anything that comes from animals. The lent culminates in what is known in Greek as  “Megali Evdomada” – the week from Palm Sunday to Easter Sunday. Saturday is the last day of lent and it is filled with preparations for the traditional midnight meal. Late on Saturday night, people go to church, where at midnight lights are switched off. Immediately after, the bells ring out announcing the resurrection of Jesus and people start cheering. Greeks also take candles with them to church. The priest lights a candle representing the eternal flame Jesus and people light their candles from it. People then carry home the candles lit at church to bless the homes and families.

Chios is a popular destination for Easter time since along with the traditional Greek Easter customs, the island also has a quite unique and “explosive” way of celebrating Easter! You might be wondering what exactly that means! The reason is the famous rocket war or the “Rouketopolemos” in the village of Vrontado.

The Rocket War takes place on Good Saturday’s Eve before Easter in the village of Vrontados, north of Chios town. Every year, during Greek Orthodox Easter celebrations, members of two rival churches – Agios Markos and Panagia Erythiani that are located 400m apart across a small valley in Vrontados, stage a “rocket war”. They fire thousands of homemade rockets towards each other while the churches continute holding the mass. The rockets are wooden sticks loaded with a propellant mixture containing gunpowder. The objective for each side is to strike the bell of the opposing church. The number of rockets fired reaches tens of thousands and the preparation of rockets for next year’s rocket war begins almost immediately after Easter.

The day after the rocket war, direct hits on each of the Churches’ bell are counted to determine the winner, but each parish claims victory over the other. As a result of this disagreement, the two churches agree to settle the score next year, thus making sure the tradition continues next year!

Origin of the Chios Rocket Wars 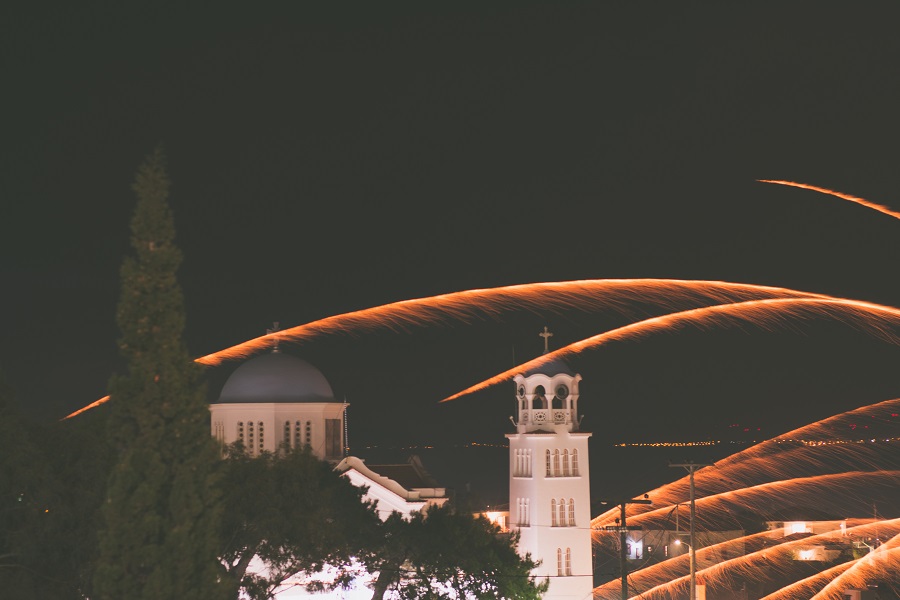 There are various legends about the origins of the Chios rocket war. In reality we cannot for sure know the answers to these questions, but locals have all kinds of speculations about how, when and why it started.

According to one version of local history, the festival has been celebrated since the Ottoman era.  It was allegedly at the time performed with real cannons until Ottoman authorities prohibited their use in 1889.

According to another local tradition, in the late 1800s, when Turkey occupied Chios, the local Christian population wasn’t allowed to celebrate Easter. So two churches came up with a plan to keep the Turkish authorities away while they held an Easter mass in the Church. They staged a fake war using cannons and fireworks.

In the last couple of years, tens of thousands of firework rockets are being fired, creating an unparalleled view the night before Easter. This unique albeit slightly dangerous spectacle attracts locals and tourists alike

Alios Tours offers a Chios Easter in 5 Days package with tailor-made itineraries that include Easter festivities, the Rocket War, food tastings and other authentic local experiences.