Six of the most Delicious Greek Destinations

Greece is known the world over for its great testing produces. But with more than 227 islands scattered across the Aegean Sea (let alone the mainland), how do you know where to go?

To help you decide, here are six foodie destinations in Greece:

When you conjure up images of Greece in your mind, it’s Santorini that comes to mind. This breathtaking destination is one of the most famous and popular, attracting tourists from all corners of the globe.

It’s also a top foodie destination, in no small part down to its volcanic history that has created an ecosystem rich in minerals. For this reason, the island is known for growing its own varieties of fruit and vegetables, including super sweet tomatoes and split yellow peas. This has led to a number of great-tasting local dishes, such as Fava me Kouki (from yellow peas) and tomato-based dips.

Like the rest of Greece, the island is a big fan of baked goods, and their local take on Saganaki (spinach pie) includes a generous topping of fresh Greek honey.

With views and menus to take your breath away, there’s no shortage of restaurants to seek out. But for a gastronomical treat, check out Selene.

The capital of Greece is home to a mix of wonderful traditional cooking and modern experimental dishes. From fine dining to family-run tavernas, everything you could hope for can be found, with views of the Acropolis at every turn.

As well as host to a number of big foodie events, like the Athens Street Food festival, it’s also home to an array of varied restaurants. Michelin-starred Hytra is the place to go for Greek gastronomy delights. But for equally as charming street food, there’s plenty of vendors in and around the city. The local favorite dish of souvlaki is best enjoyed in humble settings at Kostas (Pl. Agias Irinis 2) for all the local feels!

If you haven’t been on a walking food tour of Chios in Greece, then now’s the time. This is the best way to uncover awesome home-cooking techniques with local experts. It’s also a chance to sample the many different meze dishes the island is known for.

This includes everything from fried zucchini flowers to ice-cream made from its local mastic trees. With citrus fruits growing by the bucket load, it’s also hard to avoid delicious orange-based desserts.

The pretty hideaway of Lesvos in Greece is known for great cooking using simple ingredients. Surrounded by water, it’s no surprise that fish features heavily on most menus. Try the Lakerda – a sushi-style raw fish, as well as sardines dripping in olive oil. It’s widely believed that due to the fertile ground, Lesvos produces some of the best olive oil in the country. 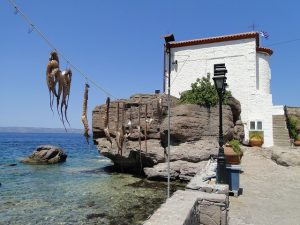 The largest of all the Greek islands, Crete has carved out quite a reputation as a foodie destination. This is also because it is the national provider of Raki (a hardcore spirit up to 90% proof!). It also produces famous wines such as Lrarakis Assyrtiko.

Food-wise, Cretan cheeses are amongst some of the must-try local produce, best enjoyed with a side of fresh bread and locally produced olive oil. For those with an adventurous palette, Chochlioi Boubouristi is worth a try – oh yes, did we mention, it’s made from snails. Only in Greece!

From dried fruits to chargrilled delights, Thessaloniki is on the map as one of the most exciting food destinations in Greece. It has even been hailed the culinary capital of the country.

A walk along its promenade conjures up tens of great eateries to enjoy, ranging from ice-cream parlors to traditional tavernas. The after-hours culture is big here too, with plenty of bars and ouzerie’s to head on to.

For foodie heaven, about an hour’s drive from the main streets of Thessaloniki is the Sani Resort. A five-star holiday destination, with world-class restaurants. On the complex, you will find Pines – a pioneer of local cooking. It uses fresh locally sourced ingredients within 100km of the resort, to create a true ‘farm to table’ experience.