The Best Street Food in Athens

Street food in Greece is a big a thing. In every corner you will come across hidden gems with the best posibble tastes; savory and sweet. The sprawling metropolis of Athens makes it a must-visit for those with a love of; culture, history and food.

Indeed, eating is at the heart of Greek culture, with Athens street food amongst some of the most vibrant and exciting on offer.

Whether it’s your first of the fifth visit to the city, here’s seven of the best local delights to indulge in. Found down winding streets and corners of cross-roads, it’s time to take a culinary journey to Athens and back.

A koulouri wrapped around your wrist, while walking the streets of Athens, is a rite of passage. It’s also one of the most famous street foods in Greece.

The large ring of bread is garnished with sesame seeds, for an authentically Greek taste. Think of it as the locals answer to New York’s pretzel!

Koulouris come in different shapes and sizes, including long breadstick type sticks and small doughnut rings. Although they vary in consistency, depending on where you go, they tend to be softer in Athens. Head to legendary To Koulouri tou Psirri bakery for an unmissable choice.

There’s nuts, and there’s nuts. In Athens, you can buy nuts by the handful or truckload from the many street vendors around. Both tourists and locals alike can’t get enough of them. Usually, there’s also dried fruit too, as part of the local produce the country is known for.

Never before have you eaten pistachios so fresh (or cheap), let alone dried pineapple, mouthfuls of pine nuts and crunchy roasted almonds.

If you don’t have a local guide to tell you where to go, it’s worth embarking on a walking tour to access some of the best-kept secrets.

If Greek street food is famous for one dish, it would be the humble souvlaki. And what place better to indulge than its capital in Athens?

Rotisserie cooked meat (usually pork) wrapped in perfectly warmed pita, sprinkled with onion, herbs, and tomatoes, and covered with a layer of fresh tzatziki – what’s not to love! This family-favorite can be enjoyed in its traditional form or brought to life with a touch of hot or garlic sauce if you’re feeling brave. Either way, don’t leave the city without trying one.

Comfort food and spinach aren’t often said in the same sentence. However, this stupendous street food dish is a popular go-to.

Layers of perfectly baked filo pastry encase in a delicious spinach and feta filling. It’s one of the many pastry delights this city has to offer.

Street food often conjures up images of eating on-the-go, but this can get a little messy with spanakopita. As such, it’s best enjoyed in the moment with a local Keo or frappe.

If you like doughnuts, then you’ll love loukoumades. These golden balls of deliciousness are on a par with the Acropolis for your tourist checklist.

These deep-fried balls of dough are lavished in sprinklings of cinnamon, walnuts, and syrup to produce a simply Moorish treat. Scoff them as you stroll around the city, and you’ll balance out the calories… sort of!

Did someone say frappe!? Ok, so it’s not strictly street food, but the Greek’s love of coffee verges on obsessional. To the point that the average person drinks 5.5 kilos of the good stuff every year.

It would, therefore, be remiss to leave it out.

Go for a frappe, a Greek coffee or iced-coffee – there’s plenty of cafes in Athens to watch the world go by. Your biggest decision will be to go for one teaspoon (sketos), or several (vary glykos).

With its privileged coastal position, Athens is a mecca for seafood lovers.

Deep-fried fish snacks are a popular favorite to munch on, as an inexpensive treat. There’s plenty to choose from, including anchovies, squid and shrimps. However, sardeles (sardines), are one of the more appetizing for those new to Greek street food. 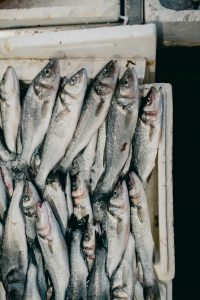 Athens is a fun and vibrant city, with an equally inviting menu of street food to enjoy. From souvlakis to spinach pies, and coffee to koulouri, this is Athens street food and you’ll never go hungry in.

Find out more in our Travel Guide Athens