What is the one thing that brings Greek people together? The one thing that’s the most common characteristic of Greek culture? Well, food of course! Greeks take their cooking seriously. It’s not just a way to get all the necessary energy and nutrition to them. It’s also about flavor!! In a previous blog post, we talked about the typical Greek dinners. But what about the dishes that Greeks consume when they want to feel at home? The meals that scream comfort to them? Well, this article is all about finding out what are the must-try Greek comfort foods!

This is one of the dishes that is best consumed during a cold day or night. Fall and winter call for this traditional Greek meatball soup. Giouvarlakia consists of meatballs that have rice in them. It is cooked on the stove on low heat, and in the end, the entire soup is covered with a sauce made out of egg and lemon juice. Greek gastronomy, it is all about simplicity and fresh organic ingredients and giouvarlakia is the epitome of that notion. It might not be a beauty to look at, but it’s so tasteful that it will only leave you wanting more!

Gigantes or large beans is a typical Greek comfort dish and a twist to the classic ‘baked beans’. They are considered a spicy dish as they are served with ‘boukovo’ the Greek kind of red pepper flakes. Legumes and beans are a big part of Greek cuisine. And they might be considered a food fo the poor but we can guarantee that Greeks know how to make them taste like they are the most expensive ingredient! You can’t say no to this amazingly healthy and tasty vegan Greek dish! 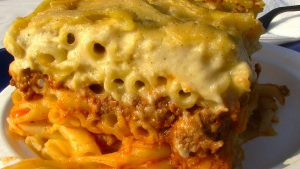 We bet you already know and love moussaka! But what about pastitsio? It is really similar in the way it’s layered and baked to our beloved moussaka. But pastitsio consists of pasta – usually long thick spaghetti – and a bolognese pasta sauce, topped with a rich, cheesy bechamel. There is not a Greek that doesn’t love pastitsio and most Sunday family meals have pastitsio as the ‘piece de resistance’. And we are completely fine with this! Next time you are at a Greek tavern order pastitsio instead of moussaka. WARNING! You might want seconds!

We will end this series of the must-try Greek comfort foods with a dish that’s a more acquired taste. But nonetheless delicious! Octopus with pasta might not be your typical dish to pop in mind when thinking about comfort, but don’t knock it till you try it! This is definitely a one of a kind dish that’s so satisfying. It is a dish that consists of octopus, pasta and tomato sauce. The pasta used is traditionally macaroni, but of course, you can try it with some other kind of short pasta shape.

Greece has a plethora of fresh seafood. Don’t leave Greece unless you try a meal like that.

About the Author: Pirate Scale